RISI has just completed the latest 10-year global tissue demand forecast through 2025. The new forecast includes several changes from the previous one, but with the exception of a couple of regions and countries we can conclude that overall growth prospects in the global tissue business continue to be good.

Global consumption of tissue grew at an average annual rate of 3.4% in 2005-2015, and market volume increased by close to 10 million tonnes. The growth rate was lowered by the slow growth in 2009 as a consequence of the global recession. On this strong growth base, we have seen major expansions in the tissue industry in all regions. Normally, the global growth rate has remained above 3% annually even in difficult years, such as during the Asian financial crisis in 1998 and in the aftermath of September 11, 2001.

The sound growth trend was abruptly broken in 2009 by the Great Recession and tissue consumption grew by only 1.2%, due primarily to declines in North America, Europe and Japan as all other regions showed some growth. However, since 2010 the global tissue market has recovered and experienced growth rates between 3.1% and 3.9%, with 2015 recording good growth of 3.9% after a mild slowdown in 2013-2014 (Figure 1). 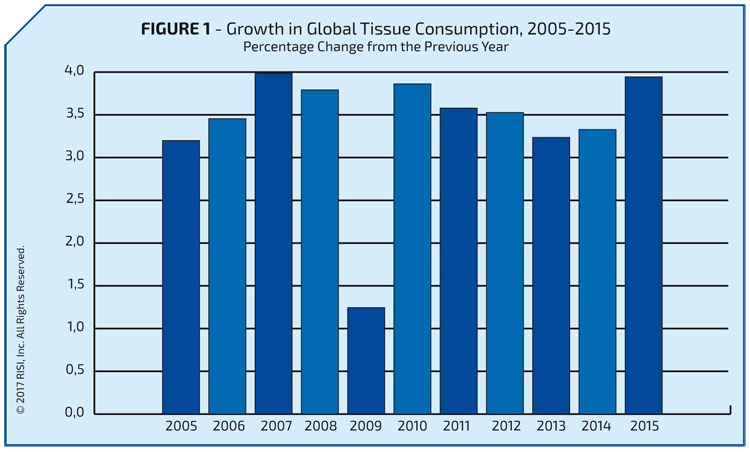 In 2005-2015, global tissue market expansion was driven by emerging countries. Based on volume growth over the last 10 years, emerging regions accounted for about 81% of global growth with North America, Western Europe, Japan and Oceania together making up the remaining 19%. China stands out with a roughly 40% share of the global growth in 2005-2015, followed by Latin America with the second largest volume growth among all regions.

Volume growth in Western Europe was disappointing in the period, mainly due to the long-lasted recession in Southern Europe, which resulted in flat or declining tissue consumption for several years after the 2009 economic collapse. So volume growth in Eastern Europe, the Near and Middle East and Asia Far East exceeded that of Western Europe in the 10-year period as illustrated in Figure 2. 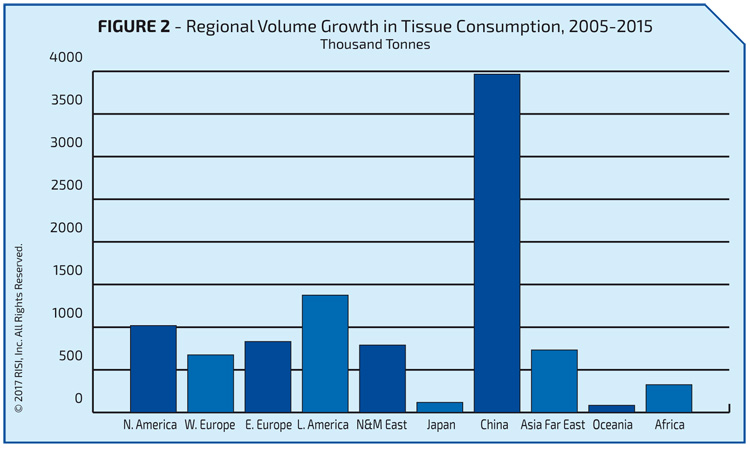 RISI’s latest forecast expects global tissue demand to grow by an average of 3.5% annually between 2015 and 2025, which is only slightly more conservative than our long-term 3.6% growth in the previous edition of the Outlook for World Tissue Business. China, which in recent years has shown explosive growth in tissue consumption, will continue to be one of the major drivers of global tissue demand, despite a slowdown in its growth rate. Apart from China, growth in relative terms is expected to be strong in the Near and Middle East, Africa, Eastern Europe and Latin America, but weak in Japan, Western Europe and North America.

Volume growth over the forecast horizon will be more than 14.2 million tonnes, corresponding to 1.4 million tonnes annually. China will account 40% of the growth, followed by Latin America (14%), North America (11%) and the Near and Middle East (8%). The 80/20 relation in volume growth between emerging markets and developed regions is expected to continue. China is projected to become the largest tissue market in the forecast period; it surpassed Western Europe in 2014 and will overtake the United States in 2018 and North America (USA and Canada) in 2020 in terms of market size.

This will take place providing China’s economy continues to grow as assumed without any major collapses, enhancing average purchasing power and enlarging the middle class in the country. China’s rapid urbanization pace will also contribute substantially to the expansion of the tissue business.

The forecast does not include any speculation about the consequences from possible measures against free trade and other political issues which could change the global economic outlook and hence the prospects for tissue demand growth.

SCA Hygiene Products passed Kimberly-Clark (K-C) as the world’s leading tissue supplier (>20% minority-owned subsidiaries are included) through the acquisition of the majority of Vinda Paper in late 2013 and now has about 830,000 tonnes more capacity than K-C. But even the largest tissue company does not account for more than 10-11% and the second-largest for more than 8-9% of global tissue capacity.

APP’s organic growth has made it the third leading global supplier before Georgia-Pacific (G-P), which is now the fourth-largest supplier with tissue capacity only in the USA. P&G’s sale of its European tissue assets to SCA and recent closures in Mexico reduced its capacity, but it continues to hold the fifth position.

P&G ended its international tissue production with the closure of its last Mexican tissue PM in April 2015. Hengan of China now holds the sixth position and has at least temporarily overtaken Sofidel after starting up a couple of new PMs in the second half of 2016 and more from delayed projects are scheduled to come on stream in China this year along with others recently announced, also for 2017.

Sofidel acquired its first mill in North America and occupies the seventh position in the capacity ranking. It is expanding in North America by building a greenfield mill in Circleville, Ohio. These seven companies have an annual capacity of 1.0 million tonnes or more, and a capacity of more than 650,000 tonnes is now needed to make it onto the top 10 list. The total number of tissue mills in the world is quite large and there are several hundred entrepreneurs in the business.

The top three companies, SCA, K-C and APP, currently hold 24%, the five largest 33% and the top 10 companies clearly less than half (42%) of the world’s identified tissue capacity, which shows how fragmented the global tissue industry is. In 2005, the global tissue industry was more consolidated than today: the top three companies accounted for 39% of the global capacity, the top five for 48% and the top 10 for 56%. Two things should be noted: new mills in China have decreased the overall global consolidation degree and the top companies vary by region so that the global shares are lower than what would be expected by looking at the regional shares (Figure 3). 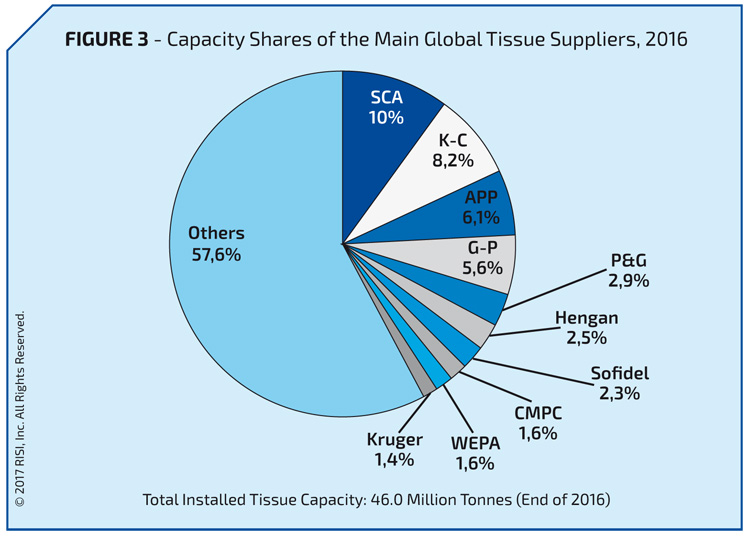 The tissue business has recently attracted a lot of new investments as it is one of the few paper industry branches that still has sound and continuing growth. Investment activity started to pick up in 2006 and 2007 and reached a new historical peak in 2008, very much affected by the high investment activity in China, as well as in other regions such as Asia Far East, Latin America and the Near and Middle East.

The effective capacity increase continued at a high level in 2009, partly from investments and expansion decisions made in 2007-2008. The Great Recession in 2008/2009 slowed investment activity, so less capacity came on stream in 2010-2012. But after the recovery in 2010-2012, companies started to plan new investments – and at an accelerating pace. The recent peak year for investments in the global tissue industry, 2008, was approached in 2014 and surpassed in 2015.

There was another new investment peak in 2016, although some of the announced projects were delayed to a later date and some mill closures may have occurred in countries such as China, where mill shuts often cannot be immediately recorded.

Current calculations from new projects show a net capacity increase of 2.7 million tonnes for 2018, again much more than the global tissue market growth is expected to be. Investment activity has overheated not only in China, but also globally. Ultimately, the global tissue market will not be able to absorb all the announced expansions, and delays are likely as suppliers have no interest in building PMs that will be idle due to a lack of demand. The average capacity utilization rate in the global tissue industry remained rather flat at around 89% in 2004-2007, although there were large regional variations.

Substantial investments in new capacity resulted in a nosedive in the utilization rate in 2008, and with the cut in global demand due to the recession, the downward trend continued in 2009, when global average tissue industry operating rates fell to slightly above 84%.

There was a mild improvement in 2010-2012 when fewer expansions came on stream, but the average operating rate did not quite reach the level of 87%, somewhat below the historical long-term average. Since 2013, capacity utilization has been in free fall due to the accelerating investment activity, and remained below 84% in 2016. New supply from massive investments, particularly in China, Latin America and North America, will send the global tissue capacity utilization rate into further decline in 2017-2018.

There is a serious threat of global overcapacity, which can only be relieved though project delays, postponements and closures of older capacity. Our current calculations show that the average global tissue industry operating rate could fall as low as less than 80% in 2018 and 2019, which is a horror scenario for industry profitability. However, we do not believe that this will happen as companies will change their plans and restructuring will occur. Nevertheless, the prospects for realizing new investments in the next few years are not very good (Figure 4). 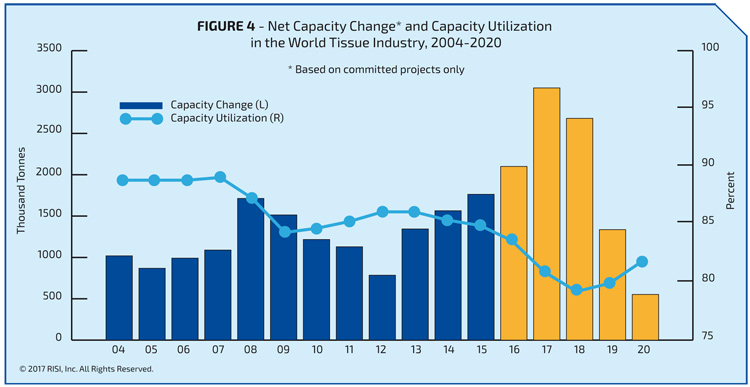 In conclusion, there is substantial overcapacity developing in the global tissue industry and this very competitive phase is expected to continue through the next three to five years.
Source: papnews