Municipal recycling has been on a bit of a roller coaster ride in recent years with changing material streams, changing commodity values, and changing end markets. During the WasteExpo Together Online Conference Sept. 14, several recycling industry stakeholders discussed some of the challenges and opportunities the industry has been experiencing in 2020 during a session titled “The Ups and Downs of Recycling.” 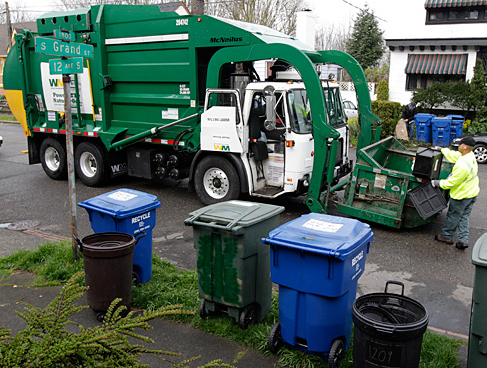 Contamination is one challenge that municipal recycling programs have faced in recent years since China implemented the National Sword Policy a few years ago. And there are some opportunities to improve upon this challenge, the speakers said.

Bell of Waste Management said he thinks contamination has been an issue for municipal recycling programs for the past decade.

“It’s something we’ve been working with on our inbound customers, making sure they’re recycling the right items,” he said. “I think in 2018, our average residue rate was really high—about 25 percent. In 2019 and 2020, we’ve seen those levels drop below 20 percent, and there’s still a lot of room for improvement, but nonetheless, we are improving and moving in the right direction on contamination.”

He added that Waste Management has been trying to combat the contamination issue through its recycling education program called Recycle Right that educates consumers on the right items to put in recycling bins.

Anderson of DSNY noted that her district is very focused on simplifying its message to residents on what to put and what not to put in their curbside recycling bins. She said DSNY features a dual-stream recycling program that collects recovered paper in one bin and metal, glass, and plastics in another bin.

“We never use resin numbers because it only confuses people, and they aren’t on all products,” she said. “We had an interesting year this past year where the state department of environmental conservation put together a New York Recycle Right program and we said, ‘OK, how do we align on education?’ We asked, ‘What are 12 items, one item a month, we can all agree to belong in the bin?’ And we pushed out that messaging once a month. For instance, batteries are bad was what we agreed. The cardboard is generally good. So, we found a way within New York state to align on [what’s recyclable].”

The speakers discussed the Washington-based American Forest & Paper Association’s new pizza box recycling study released earlier this year that advocated recycling greasy pizza boxes in curbside programs. Although a greasy pizza box isn’t the cleanest material to sort, Bell said he prefers that type of contamination to items that could pose safety hazards such as lithium-ion batteries or propane tanks.

“I kind of view contamination in two different buckets,” he said. “Pizza cheese on cardboard doesn’t harm anyone, but a propane tank or batteries that catch on fire can completely destroy facilities. When I look at contamination, that’s what I lean on. You have to have strict guidelines on that. We want all material to be clean and dry, but I’ll take a piece of cheese over a propane tank any day.”

The COVID-19 pandemic has left some municipal recycling programs financially strapped, Anderson said during the webinar. She noted that DSNY has a very tight budget in 2020 as a result.

DSNY has not cut it’s refuse or recycling operations at all, she said, adding that those two programs are mandatory. However, she said curbside composting, which is a voluntary program in New York City, has been suspended. Additionally, the city’s street cleaning program managed by DSNY has had about 60 percent of its budget cut this year. Also, drop-off programs such as the city’s household hazardous waste drop-off event and sites and electronic scrap pickup programs are suspended in light of budgetary cutbacks caused by COVID-19.

“We’re hopeful we can bring these programs back sooner rather than later,” she added.

Bell added that Waste Management continued to invest in recycling infrastructure in 2020, despite the economic challenges this year brought on by both COVID-19 and lower commodity prices.

By the end of the year, Bell said Waste Management will have about 10 to 12 robots actively working in its facilities across North America. He added that Waste Management opened its new Salt Lake City material recovery facility (MRF) earlier this year as well as its flagship MRF of the Future in the Chicago area. He noted that the MRF of the Future “is our largest residential recycling investment” and that it’s a “highly automated” MRF that uses intelligent sorting.

“The idea of that facility is in the next five to 10 years, we might not know necessarily what the recycling stream is going to look like, but this [facility] has the ability to pull out the products that we choose to,” he said. “We’re really excited about that technology as it comes up online and that will be how we model a lot of our other facilities as well.”

During the session, all speakers discussed the need for end markets domestically and abroad for items collected in curbside recycling. End markets are shifting in response to China’s restrictions on scrap imports. China plans to stop accepting all recovered paper imports by 2021, as well.

“In 2017, we shipped 27 percent of our material to China, which was mostly cardboard, mixed paper, and even newsprint,” Bell of Waste Management said. “Then in 2020, those levels have gone below 2 percent. Having a large customer as China step out of the market, and what we’re seeing in September, some of the shipping lines will stop taking orders going to China, and China has slowly since 2017 prepared for the all-out ban on recycled materials in 2021. We’re seeing that take place.”

Wright of the EPA said looking into end markets for curbside recyclable materials is something the EPA is concerned about. He added that it’s a key component to the EPA’s national recycling strategy that it plans to announce in November. The agency is also encouraging businesses to sign the America Recycles Day pledge, of which about 220 companies and organizations have signed to date.

“We anticipate national goals and strategies will inspire additional collaborative action to help us all continue the momentum we’re going to need to enhance the recycling system,” he said.

However, Bell said he sees more opportunities for curbside recyclable materials in domestic markets popping up in response to China closing its doors.

“We’ve gone from roughly 63 percent of materials staying domestically to well over 80 percent in 2020,” he said. “There’s a lot of new capacity coming online for domestic mills, so I think you’re seeing some of that infrastructure shift from the China region to the United States.”